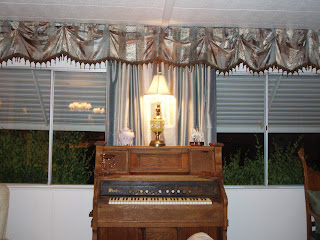 INTRODUCTION
The great fiery orb creeps across the dome, closely pursued by the darkness whose oozing fingers slowly but aggressively invade until every last, minute, remnant of light is blackened.  The stars are, indeed, a great sigh of relief!

The darkness always has its way with us, pawing at us, tossing us into the air, slapping us around, like a cat with its helpless prey.  The night’s magic potions allow us to see things that during the daylight are only sensed by unexpected shivers that run up and down the hairs of our arms and neck.

As you read on, hear the narrator’s voice fill the great hall of your innermost mind.  When you hear that voice drop for the final period, gaze into the shimmering space in front of and around you.  You will see clearly those haunting figments of your imagination and peripheral vision.  They will fade quickly, so don’t forget to look up and about immediately.

THE STORY BEGINS
An army of leaves, swirling in a cloud of dust, drives across the front lawn toward the house, and with perfect choreography, divides into two columns, each sweeping down the shaded hollows highlighting the property lines between the neighboring houses.  The entire platoon disappears over the back fence, with little debris left behind.  Only the autumn winds could so predictably and successfully launch such a sneak attack at three o'clock each afternoon.

Sometimes the front and back doors would fly open and then slam, rattling the adjacent walls and windows.  Dad would shout out, "Stop running through the house!"  But the kids were quietly playing in the back yard, and no matter how often this event replayed itself, Dad was never convinced that it was just the autumn winds.

I had come to stay with him for as long as it might take.  In fact, all of us had come.  It seemed like the only right thing to do.  I mean why wouldn't we accompany him on his final laps?  He was, for better or worse, bigger than life, our father, for crying out loud.

Well, actually, there were plenty of good reasons to justify letting him go it alone, but we decided, perhaps our final opportunity for vengeance, to accompany him.

It was a feeling that I could not find a word for.  At times, it was comforting that we were all there to walk our father to death's door.  At other times, it felt very odd, a little embarrassing even, a tad ghoulish, and at times invasive, like being in the room when someone is having a prostate exam.

Despite the certainty of his impending doom, there was still a cosmos of uncertainty about the exact moment, whether it would be days or weeks or perhaps even the unlikelihood of several more months.
Since I lived so far away, Dad was puzzled that I was obviously there for more than a visit. And when I would gingerly tell him that I wanted to be there when he died, he would say, "I don't see any demise happening here anytime soon.  You might as well go home."

But I couldn't pull myself away.  I could not get on the airplane to return home.  There was something addictive to being a part of an event so big and so small and so significant all at the same time.  I wanted to be there when the time came, to run along side the train waving goodbye for as long as I could.

My youngest sister seemed to be the expert about these matters.  She claimed that Death would, at some point, actually enter the house.  "You'll feel it, smell it, touch it, almost like the fog in a horror flick.  You wait and see," Marianne predicted.  “We will all know when Death has made its entrance."

I had been there about two weeks when we were all, including Dad, sitting around talking after dinner, and someone brought up Shirley's story.  The kids were all plugging their ears and saying, "No, no, don't tell that story.”  Marianne began to laugh, and you could tell she was going to tell the story no matter how scary or creepy it was.

She had taken care of her mother-in-law, Shirley, or Grandma Shirley as the kids called her, for the final months of her life.  Gradually, there were more and more mornings when everyone was surprised that Grandma Shirley was wide awake and cheery given that she had struggled through the previous day and night just to breathe and to remain conscious.  She just kept living.

One day the doorbell rang.  Rossi's flower shop was delivering a large arrangement of Shirley's favorites, a mixture of white daisies interspersed with bright red roses.  It was at the very instant that Marianne took the flowers from the delivery woman and brought them into the house that she knew that Grandma Shirley had but a few days, or maybe even less.  From that moment on, she could sense Death’s presence in the house.

The card said the flowers were from Doris McCoy.  When Marianne told Shirley who they were from, she just smiled.  "I know," she said.  "She told me she was going to send them."  Marianne was too spooked to inquire any further about Shirley's conversation with Doris because Shirley hadn't had a conversation with anyone but family members for weeks.

But the story doesn’t end there.  Doris came up to Marianne at the grave side service and asked if Shirley had enjoyed the flowers.  Now, here's the part that’s going to send a gentle chill across your skin, leaving every hair on your neck and arms standing straight up.  Marianne did not know at the time that Doris was one of Shirley's close childhood friends back in Michigan, and had died ten years earlier.

Dad said with a twinkle in his eye, "Well, if Death comes knocking or ringing the bell, for heaven's sake, don't let it in the front door.  At least, make it go around to the back door."

We all laughed because when we were kids growing up in the old house on Clark Street, Dad had a thing about the front door.  On Halloween, for example, he would actually block the front steps with a long two by four with a "wet paint" sign tacked to it, and another sign with "Trick or Treaters, back door."

Later that evening, Marianne said that when Death does enter the house, every thing changes.  She said it’s almost as if everyone is propelled to move the person to the other side like when a group of folks get together to move and free a car stuck in the mud.

She said that it took her a long time to feel really good about walking Shirley to death’s door because everything she did for Shirley had one singular outcome–Death.  She just couldn’t get rid of the awful feeling that once Death entered the house, it somehow possessed her and then used her.

The hospice folks continued to say that Dad's time was short.  There were more and more signs of internal bleeding, and even though Dad was still walking and talking and sometimes driving us crazy, according to them, Death was closing the gap.

Nevertheless, the days moved by slowly.  And one day, out of sheer boredom, I decided to ring the front door and then quickly run around to pound on the back door.

As I ran from the front door, out of nowhere, the autumn winds sounded their attack.  The army of leaves rustled and chased me like a pack of dogs.  As I reached the back door to pound on it, it flew open on its own.  I felt someone pushing me to the ground, and as always, the back door slammed and rattled the walls and windows in the service porch and breakfast nook.  I looked about in amazement, looking for the person who had pushed me from behind.  Then the back door reopened, and it was Dad.
"What the hell are you doing?  Is this some kind of joke?  If it is, I don't appreciate it.”  He looked at me with disdain and in my wildest imagination, I saw a figure, lurking in the darkened living room behind him, with the bright red grin of the joker.  I quickly looked down, not wanting to know if what I was seeing was real or just imaginary.  Before I could get up and without asking if I needed help, he closed the door, slamming it almost as hard as the wind.

I felt pain in my ankle, I felt embarrassed, I felt angry that Dad had not changed one iota, as he would say, and a huge lump rose to my throat.  I had to hide.  I couldn't let anyone see me like this, but as fast as Dad had slammed the door shut, Marianne opened it back up again.  She stood there and looked at me.

"I don't know what just happened, but Death is here now," she reported.

And sure enough, three days later, I waved goodbye to Dad as I ran along side that train.
And just as Marianne had predicted, I couldn’t get over the feeling that I had killed my Dad.  First of all, I allowed Death to enter the house through my chinanigans.   And as Dad showed more and more distress from the cancerous tumor at the bottom of his esophagus, I began to participate in administering the medication.  But he didn't get better.  My brain concluded that I had administered death medication and killed him.

And I can’t help but think when I meet Dad, face to face, on the other side, the first words out of his mouth will be,  “So, my boy, are you proud that you brought about your old man’s demise?”

Even though it’s been ten years since Death charged at the opportunity to sneak in the back door on the heals of the autumn winds and my chinanigans, Death persists at having its way with me.  I can sense its smugness.  It continues to laugh uproariously at its own slickness, its domination, its mastery, and its success at using me.

Late at night, when I get up to go to the bathroom or get a drink, I refuse to look in the bathroom mirrors or the window above the kitchen sink, not wanting to give Death one iota of recognition.  And when the doorbell rings, especially late at night, when I am not expecting any company or visitors, (and to make matters worse, the dogs bark and growl at the presence on the other side of the door) I always suspect it’s Death just playing a trick on me.  That familiar gentle breeze sends that chill across my skin, and every hair on my arms and neck faithfully stand at attention and terror as I struggle to get the words out, "Who's there?"

Now, this is just a story.  Well, it’s my story.  Death does not have to lurk any where in your life.  You know that, don't you?  Especially not in bathroom mirrors and kitchen windows.  Get up at night and pee, for God's sake.  And when your mouth is dry and full of cotton, get a drink, and look out that kitchen window at the sleeping universe.  Don’t get freaked out when the doorbell rings late at night.  Open the door and welcome the family member who simply can’t find their key.  Don't be terrorized by the chance of Death lurking anywhere.  The reality is Death does not have to lurk.  You will always know the exact moment that it makes an entrance.  It's never by happenstance.  It's always on cue.

Posted by Vernon Bradley at 8:48 AM No comments: